Starting the day off with a trip the Main Stage, I was very keen to check out Royal Republic. Coming out to new track ‘Fireman and Dancer’ really set the fun mood for the upcoming set. Newest album mixed perfectly and older tracks like ‘Tommy Gun’ went down a storm. Deciding that they couldn’t manage to get the largest or most people in a single circle pit, Royal Republic decided to think outside the box and go for the most small circle pits. As ‘Don’t Stop Moving’ rang out the crowd were a sight to behold with pretty much everyone running around. Finishing on ‘Baby’ got a huge singalong to really warm everyone up for the day ahead. Extra points go to the band for not only appearing in matching red velvet jackets but also for playing Main Stage at Download Festival and brining out a keytar on multiple occasions (Even if it did cause a few technical difficulties). A very energetic set to start the day right and certainly a band to give a listen to if you haven’t heard them before.

Not many bands start with a demon figure on stage but then again Nepalese metallers Underside are not many bands. Started off 100% but a few songs in and had a technical issue. Luckily skill of their drummer kept the audience captives with an intense drum solo. Once the band were back on track they picked up from where they left off with the crushing guitars really hitting the tracks home and the vocals coming crashing on top of them. Unfortunately the set had to be cut short thanks to the earlier issue but not before the huge Sky Burial and then the duelling solos of both guitarists to finish off their set with a punch. 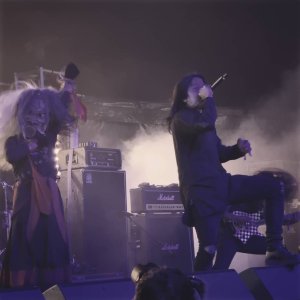 After a short break in the music it was time to head to the Avalanche Stage to check out metalcore act Palisades. The band only seem to come over to the UK for festivals and the occasional support slots. Bringing a majority of tracks from their newest album Erase the Pain to their set worked well and the crowd bounced along throughout. Title track of the album ‘Erase the Pain’ drew a huge reaction from the crowd and was certainly a highlight of the set. A very tight performance from the band and fantastic vocals both clean and screamed. Palisades definitely need to do a headline tour soon to build on their hype over this side of the pond. 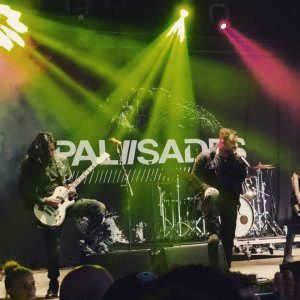 Starting off with a bang Skindred launched into ‘Sound the Siren’ which started the crowd bouncing straight from the beginning. A few songs in they brought out Gary Stringer from Reef to provide some guest vocals over ‘Machine’ which worked as a nice contrast to Benji’s vocal style. Despite the rain still tipping down, they held the crowd well within their hands with everyone dancing along seemingly oblivious to the downpour. To finish off in typical Skindred fashion the crowd participated in a very damp Newport helicopter while the band crashed through ‘Warning’. Leaving the stage to ‘Nobody Does It Better’ it was hard to disagree with their choice of songs as they always put on a fantastic show and draw a huge crowd.

Having piqued my interest in the download playlist and having five minutes spare between Skindred and Trivium I felt it was only right to take a trip up the hill to see The Hu. As we approached the Dogtooth Stage it was clear that half of download had the same idea as there were rows and rows of people packed out of the tent to catch the sensations! Unfortunately due to the distance outside the tent it was hard to comment on their sound however everyone that had managed to fit in the tent seemed to be loving it so hopefully there will be another chance to catch them in the future. 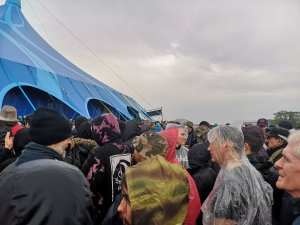 As we headed back down to the main stage to catch Trivium the skies had started to clear and the sunshine flashed through the arena. For those still slightly damp the huge amounts of pyro flying from the stage will certainly have dried everyone off. As the band kicked things off with the huge ‘The Sin and The Sentence’ it was clear that they were here to bring the metal to Download this afternoon. As the band paid tribute to the festival for giving them their big break all those years ago  it was clear this was a set for the fans and a little bit of each album was thrown in for good measure. With Matt Heafy’s voice sounding incredible and the rest of the band putting on a crushing display behind him it was clear that they were fully deserving of the spot that they had earned. As the set drew to a close with the combination of  ‘Capsizing The Sea’ and ‘In Waves’ it was clear just how many people had turned out for their set as the cries of “In Waves…” were deafening and the crowd movement jumped to another level completely. Expect Trivium to be hitting the arenas next as they certainly put on a show for Download

Turning the bass up to 11 after Trivium were this year’s controversial booking in Die Antwoord. Whilst they didn’t fit in with the other bands playing the festival they certainly fit under the alternative banner. Given the massive crowd that were there it was clear that everyone was just as intrigued to see what they would be like as I was. As it turns out not even the band knew why they were there but as they smashed through their hits it was clear that most of the crowd were getting involved. As a true marmite band it was clear that they received huge crowd reactions to their more popular songs such as ‘I Fink U Freeky’ and ‘Ugly Boy’ with the entire place bouncing along. In contract lesser well known songs like ‘Cookie Thumper’ kinda fell by the wayside and the crowd dropped off a little. Finishing their set with possibly their heaviest track in ‘Enter The Ninja’ you could feel the bass vibrating the entire ground and as they left the stage it was clear that there were a fair few converts in the crowd. Whilst Die Antwoord may not have been to everyone’s taste there it was clear that they can put on a very energetic show. For those who don’t venture outside of metal too often it was a chance to catch something different to the normal at Download. 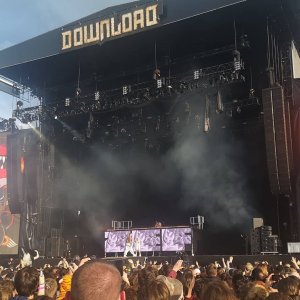 As the Main Stage was cleared for Slipknot’s huge stage show to be set up, the majority of the crowd headed over to see Halestorm play a monumental set headlining the Zippo Encore Stage. Starting off with the mighty ‘Do Not Disturb’ and ‘Uncomfortable’ the band really showed that the new album was a huge leap in the right direction for the band. As the music raged across the crowd everyone was banging their heads and this just seemed to raise the energy coming off the stage. By the time came for Lzzy to do an acoustic version of ‘the silence’ the crowd definitely needed the calm. With the acoustic rendition showing just how powerful Lzzy’s voice is it’s no surprise that she is regarded as having one of the best voices in rock! As the set cracked on there was a mandatory break as with every Halestorm show for a drum solo from Arejay, unfortunately I’m still not a big fan of drum solos and this one was no different as it seemed to take a huge amount of the energy out of the performance. Luckily for me this picked back up straight after as the band smashed through ‘Freak Like Me’ with incredible ferociousness. Towards the end of the set the band brought on fellow vocalist Asami from the band LOVEBITES – who played earlier in the day – to do a joint rendition of ‘Love Bites (So Do I)’. It was a very impressive nod to the band that had clearly taken their inspiration from Halestorm. To finish off their set with a bang they chose top track ‘I Miss The Misery’. With soaring guitar solos and a hell of a scream from Lzzy the band certainly left the stage with everyone begging for more and with the arena shows later this year it’s clear that it won’t be too many years before Halestorm could headline the entire festival!

Coming out to a combination of ‘People = Shit’ and ‘{sic}’ to create an incredible atmosphere from the start really set the bar for the rest of this evenings set. There was a reason that they had headlined multiple times and they were certainly here to deliver this evening. New track ‘Unsainted’ got one of the biggest reactions of the night from the crowd despite not being released too long before the festival. As the band smashed through their set with pin point precision it was clear to see just how good Slipknot had become and how amazing their live show was. As the set drew on older cuts such as ‘Custer’ sent the crowd into a frenzy and by the time the band got through ‘All Out Life’ anyone would be forgiven for having no voice and no knees left after all the jumping and screaming. Slipknot on the other hand were far from done with a fantastic version of ‘Spit It Out’ complete with the crouching and Jumping on a scale that could have shaken the earth before finishing their night off with the “National Anthem of Download Festival” in ‘Surfacing’. As their set came to an end, it really hit home the reason that Slipknot keep being given the opportunity to headline at download, they always bring a killer show. With the new tracks going down brilliantly it will be interesting to hear the new album when it is released and then see how those new songs transition into their set. There is one thing for sure though, it’s certainly an exciting time to be a Maggot! 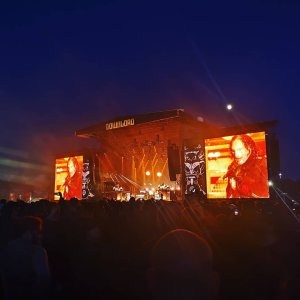 View all posts by TheOtherGuyMatt